Sicily is one of Italy’s most historically important and rich regions. This land of many different influences has often been called “land of passing” because of the many different cultures which have inhabited it.

From the Phoenicians to the Greek, the Romans, the Turks, the Arabs and the Normans, before being then taken over by the Aragonese who have founded the Reign of the Kingdom of the Two Sicilies.

The many different cultures and populations which inhabited it, all left a sign and contributed to the creation of a great melting pot of artistic, cultural and culinary traditions of this beautiful region of Italy.

When the Arabs conquered Sicily in 965 one of the most important introductions they made, together with cinnamon, sesame, almonds and many other products was the pistachio.
Sicily has an ideal lava soil and perfect climate to grow this plant, also called Oro Verde (green gold). One of the reasons might be the high price at which it is sold but anyways nowadays the area of Bronte, close to Catania, is the most important one for the cultivation of the pistacchio and is also denominated with the DOP (Denominazione d’ Origine Protetta, in English this translates to Protected Designation of Origin).

No wonder that in Sicily, pistachio can be found in many recipes. From the famous cannoli to gelato, chocolate and even in the mortadella ham, Sicilians mix pistacchio with anything.

Of course also a version with coffee was developed. One of the most famous bars that serves this delicious treat is the Bar U Marinaru on the small island of Favignana, off the eastern coast of Sicily.

The recipe is quite simple and delicious:

1 espresso (preferably with an intense body and a dark roast. Our Mokaflor Blue Blend 50/50 is ideal)
2 spoons of Bronte DOP pistachio spreadable cream

Take a cup and insert the pistachio spreadable cream. Extract one espresso inside the same cup. Then add the chopped pistachios. 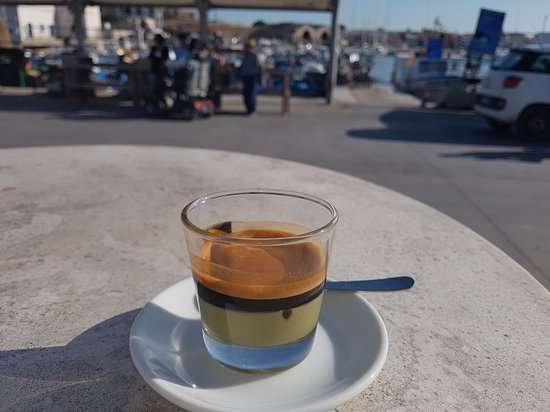